Home > Tracing the memories of Pidzamche

Where do the memories lead to?

The research of memories associated with the Pidzamche district formed the basis of the current art residency in Lviv, organized by the Jam Factory Art Centre within the international Magic Carpets Platform.

We had in-depth interviews with people who worked at industrial sites in Pidzamche in the 1960s and 1980s. And guest artists Sara Renar and Teresa Barabash immersed themselves in area expeditions and personal conversations with witnesses to the events of that time.

As a result of the artists’ work, we have: 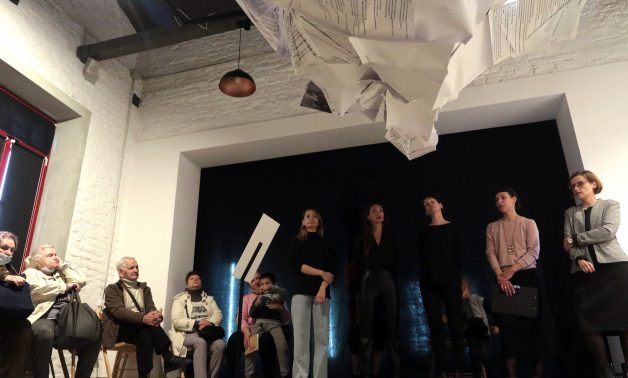 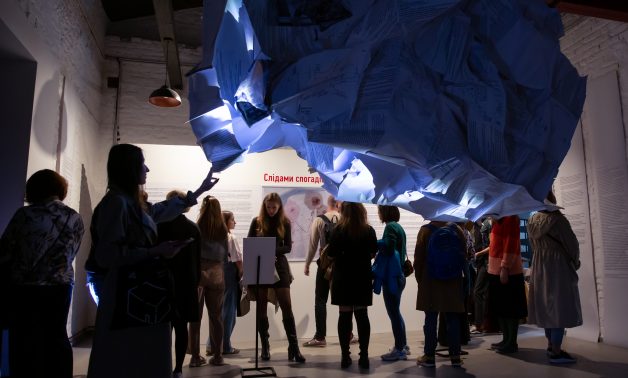 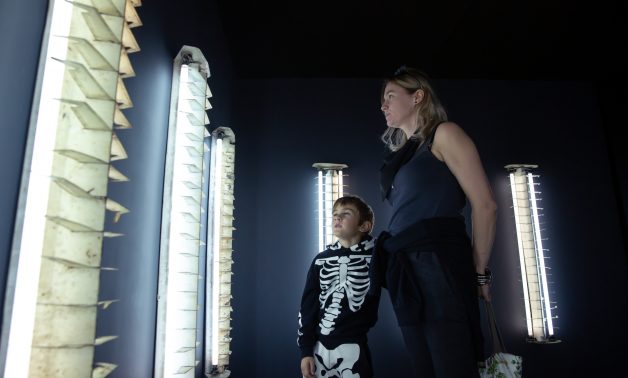 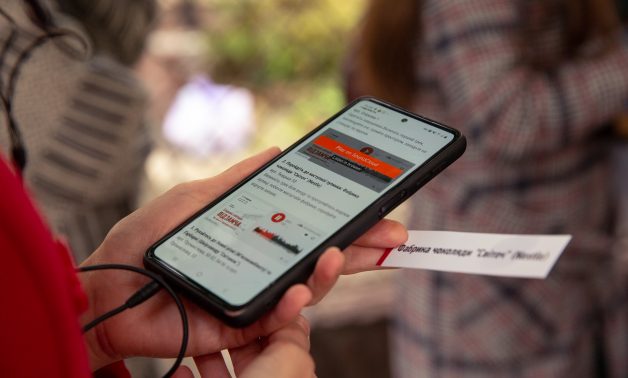 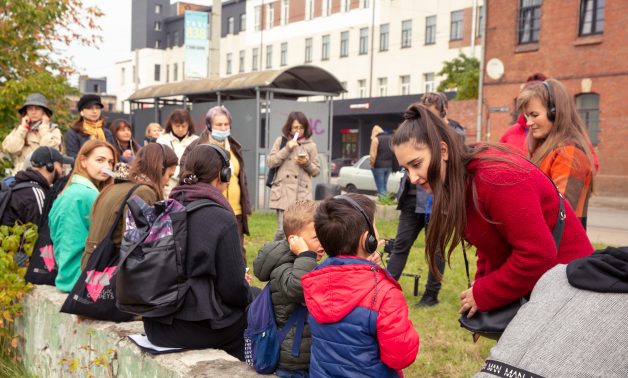 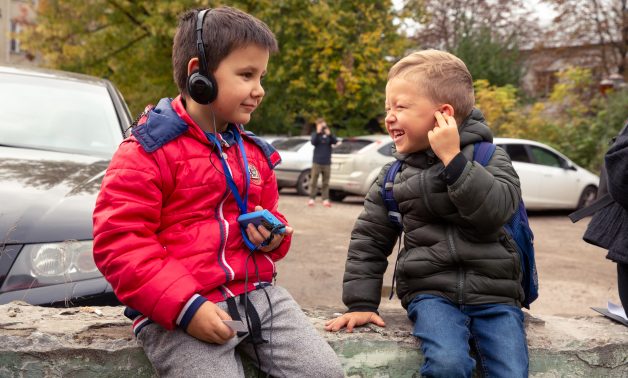 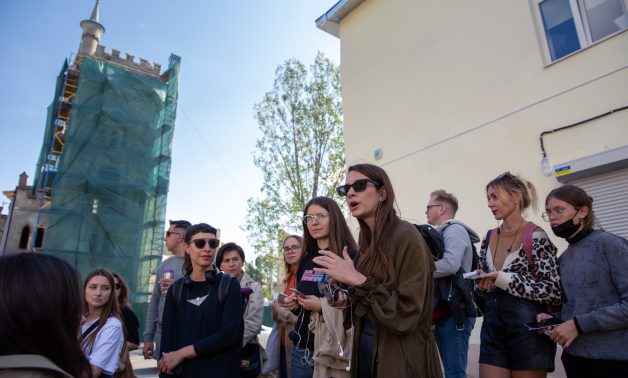 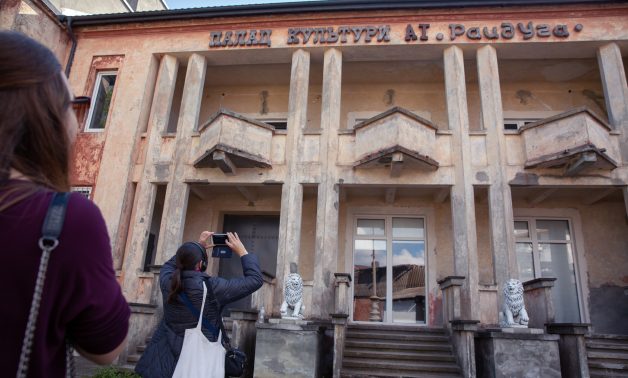 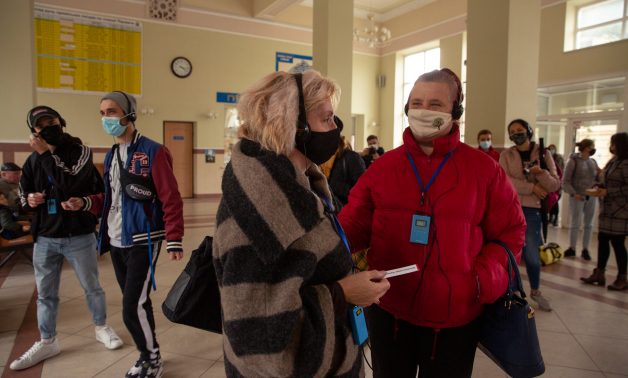 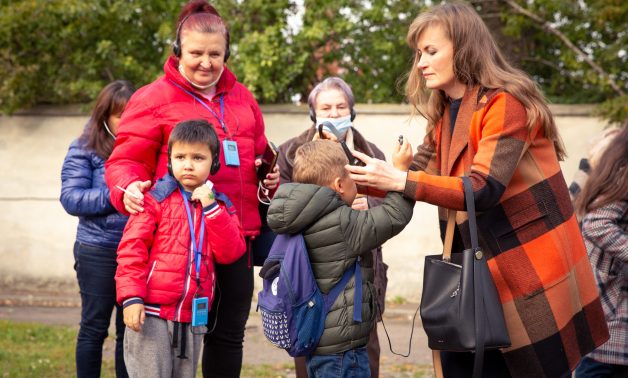 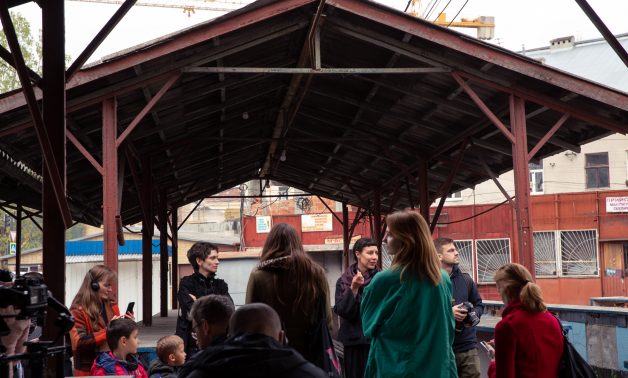 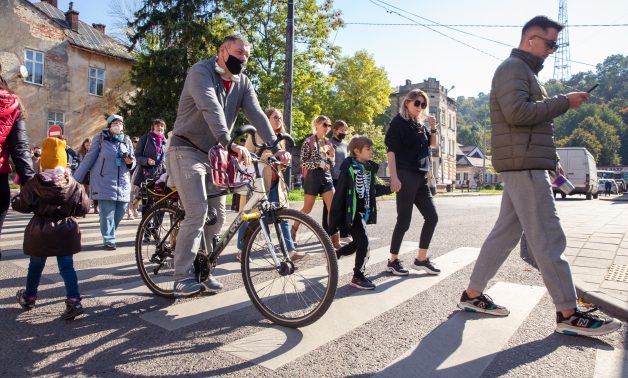 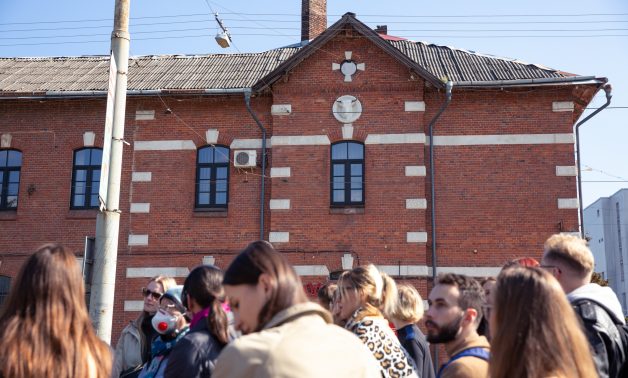 The research of memories associated with the Pidzamche district formed the basis of the current art residency in Lviv, organized by Jam Factory Art Center within the international Magic Carpets Platform. In-depth interviews with male and female residents of Pidzamche, who worked at industrial sites of the district in the 1960s and 1980s, were collected by the Jam Factory Art Center team over three years ago. During the June-September 2021 residency, guest artists Sara Renar and Teresa Barabash, together with our team, immersed themselves in expeditions of the area and numerous interviews and conversations with witnesses of the events of that time. In addition to the specified period, the artists worked with a broader timeframe of events in Pidzamche, therefore the selected sources for the research and new encounters with the residents of Pidzamche revealed the complex historical context of the area, outlining the deep layers of collective memory.

For example, we learned from one modern resident that, for her and her peers in childhood, there was a question concerning the date “1872”, which is embossed on the facade of the Bachewski factory, and which they saw every day as they were passing by. Why was it there? Their family had moved to the Pidzamche district after the formation of the Soviet Union, i. e. after the end of World War II. Our heroine told us that their perception of history was based on the school textbooks, in which it was said that the history in that territory had begun during the Soviet Union. And according to her words – there was no safe way to research or ask that time what had happened before? Who has lived here before?

Where have they disappeared to and why?

This brief example of the representative of the Pidzamche community gives us the opportunity to feel the anxieties and doubts of people who have found themselves under conditions where the authorities block and prohibit searches, hide traces, impose a distorted view of history, manipulate facts and in the end make public dialogue and debate impossible. In the territories of the Soviet republics, the authoritarian regime only allowed officially accepted events and stories. And in fact, so did every authoritarian regime in the world.

Another narrator, who was born and brought up in Pidzamche, shared with us his memories of the sounds of the factory’s horns coming from the areas. He still remembers them and would be able to distinguish one factory’s horn from another. At times when the factories actively operated, each resident of the district could hear and distinguish those horns. And also the sounds of trains passing the Pidzamche Railway Station. We found out that during that period, residents were guided in time due to these horns and train sounds, as not everyone had a watch. Factory workers also woke up in the morning to the sound of the horns, which were audible even when the windows were closed. Let’s imagine that in our digital speeded-up time, we would only know what time it is thanks to external signals from public space. It seems unbelievable. The modern generation complains of the constant lack of time, failure to keep up, though tools for time management have proliferated. We live 24 hours a day, 365 days a year, just like previous generations. What are we wasting our time on? And do we have “free time”? Are we wasting or living our time?

This is where the traces lead – not only to answers but also to questions. But the most important thing is that traces motivate the search. To have a safe opportunity to search, to ask out aloud, to discuss publicly is a valuable possession of our time. Due to the opportunity to search, we came across the article “Between Anonymity and Attachment: Remembering Others in Lviv’s Pidzamche District” by researcher Natali Otrishchenko, which gave us the impetus to create the name of the project “Following the traces of Pidzamche memories” and also presented the historical context of others who lived in Pidzamche district, their traces.

We sincerely hope that the traces will not disappear, and thanks to our project, they will become visible and give inspiration for further researches and searches.

Moments from the project research 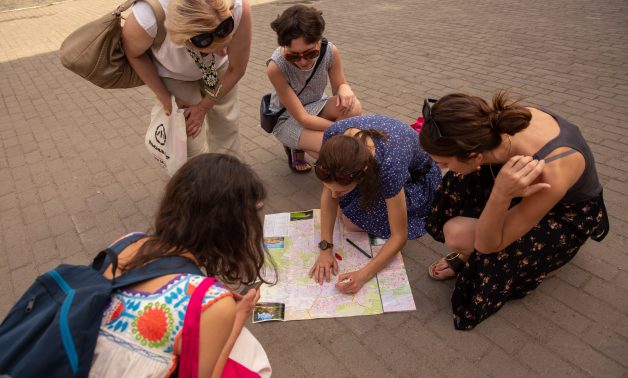 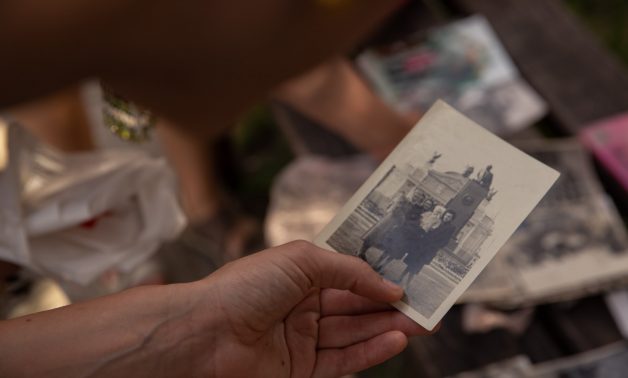 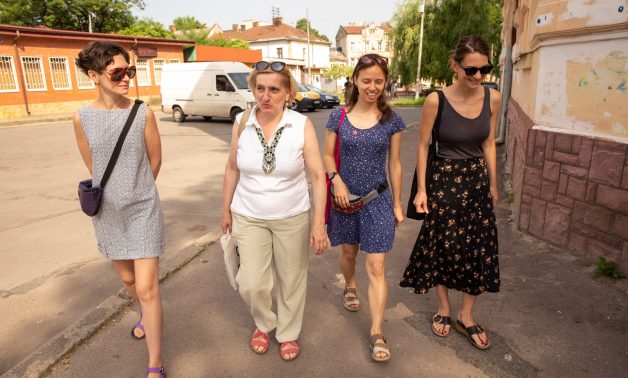 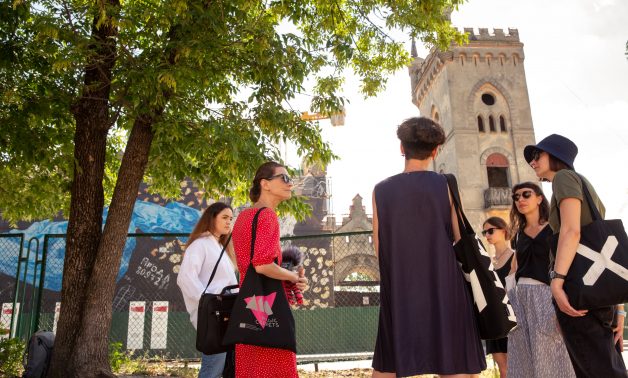 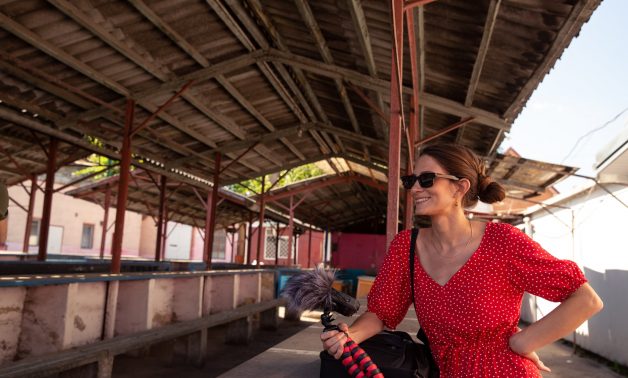 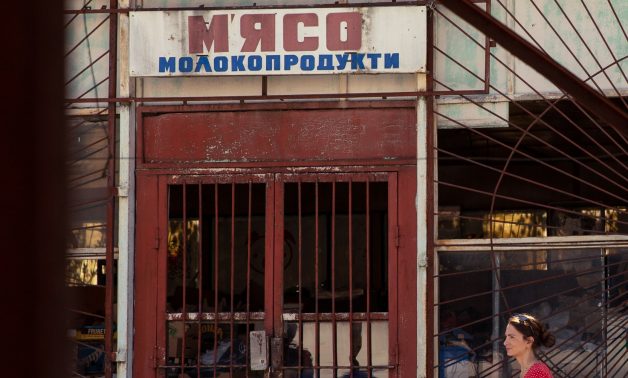 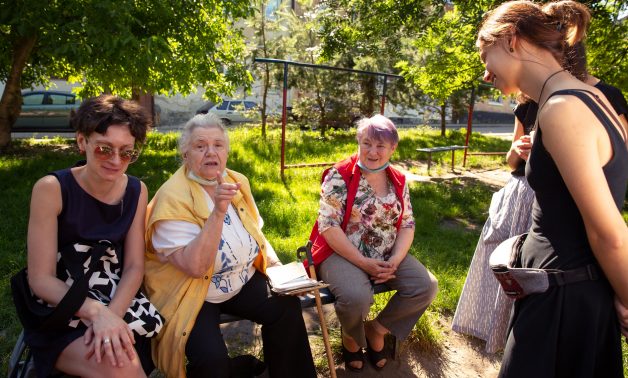 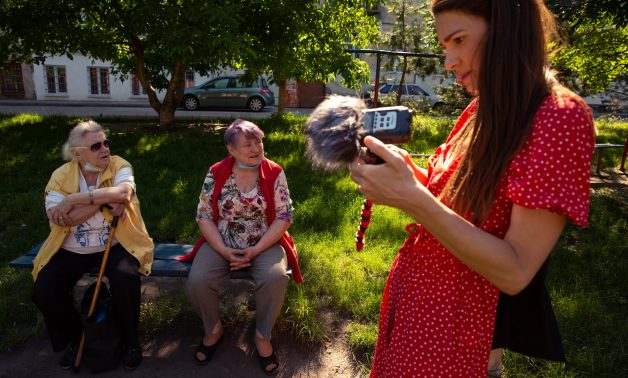 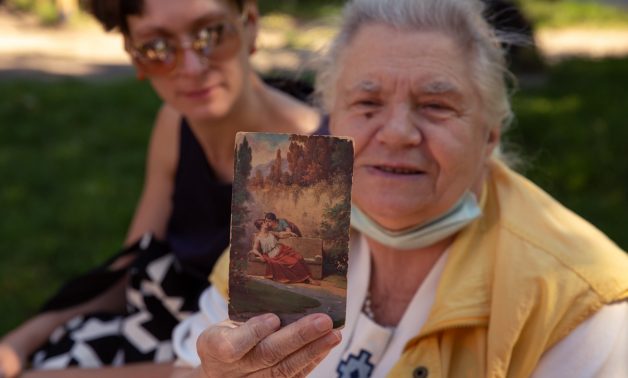 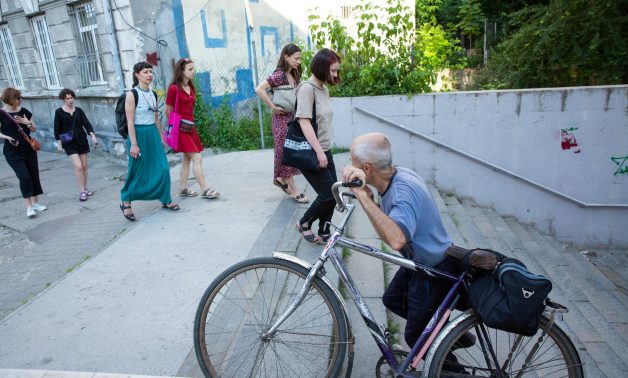 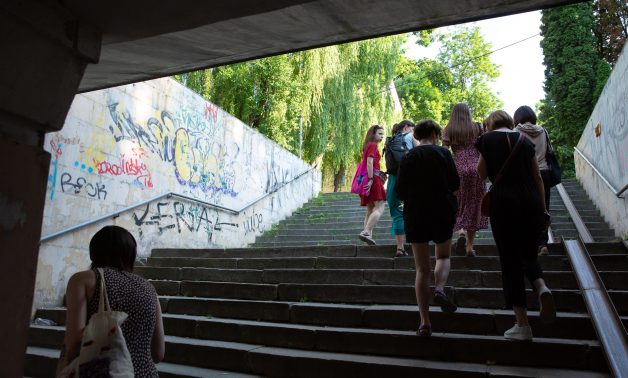 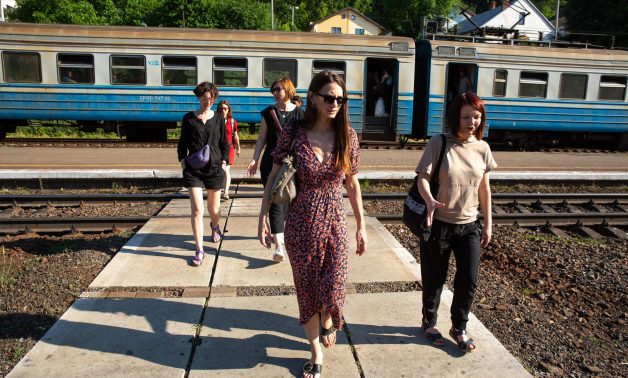 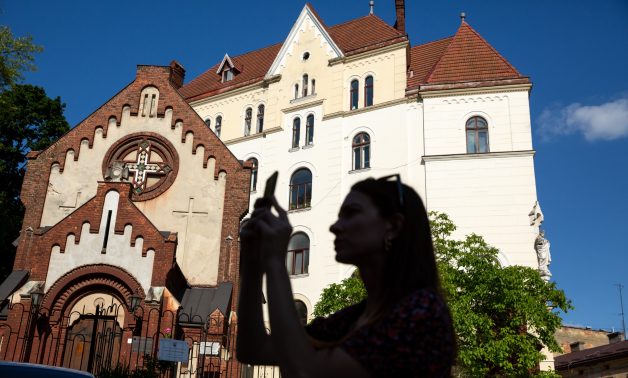 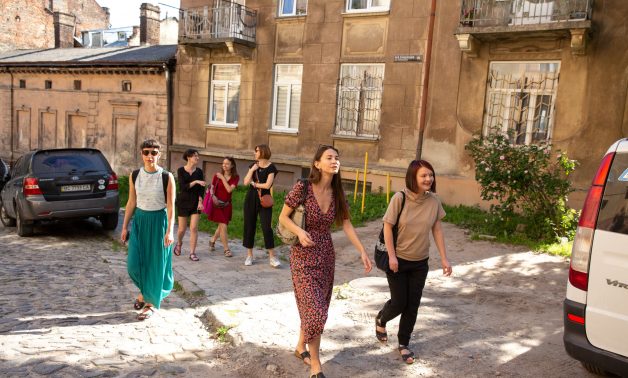 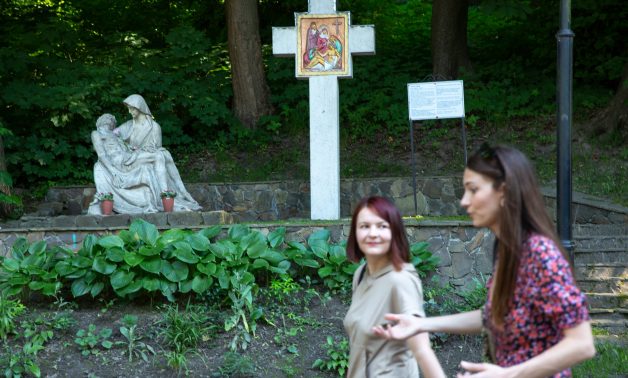 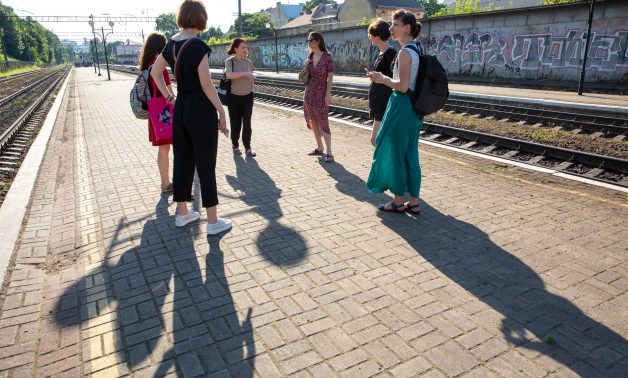 The artist Teresa Barabash deals with textiles, installations, land art, audio and visual art and graphics. She participates in all-Ukrainian, international exhibitions and festivals, creates her own projects. She has been awarded numerous prizes for her creative work.

Teresa works with current socio-cultural issues: personality development and formation, communication and dialogue, boundaries and wars, as well as other themes. She lives in Lviv.

Sound artist Sara Renar defines her artistic practice in such fields as performances with the creation of soundscapes for locations, synesthesia research, new media, interdisciplinary work. She is also a composer and performer who works in experimental/indie/pop styles, combining subtle melodies with electronic and theatrical elements. Sara studied architecture and urban planning, which she integrates into her work with sounds.

Sara has already performed more than 400 concerts and public performances; she has been awarded many regional awards and is a member of the Croatian Community of Independent Artists. She lives in Zagreb.

The historical context of Pidzamche

The history of Pidzamche is complicated and in some places deeply tragic, and is typical of the many 19th and 20th century cities of that time. At the same time, the history is rich to be explored.

At the end of the 14th and the beginning of the 15th centuries, newcomers such as Crimean Karaites, Tatars, Arabs, Jews, etc. were settled in the northern part of Lviv, “outside the walls”, on the territory of modern Pidzamche, while wealthier and more influential Jews were allowed to settle in the prestigious southern part of the city.

In the 19th century, when the industrial revolution began in European cities, the processes of industrialization also began in Lviv, although on a substantially smaller scale. Industrial enterprises were predominantly built on the territory of modern Pidzamche. In 1869, the railway was laid through the territory of the district, and high embankments were built for it. At the same time, when the railway connected Lviv with Vienna and other cities to the East, it more distinctly divided Lviv into two parts – the “worse” North and the “better” South. The same year the Pidzamche railway station was built.

Just before World War II, the territory of the area was characterized by the absence of infrastructure and proper law enforcement agencies, the availability of numerous industrial enterprises, and the concentration of poor Jews and other ethnic groups who, during the Nazi invasion became hostages of the ghetto established by the Germans in a separate territory of Pidzamche. The vast majority of the Jewish population at the time, and later other categories of inhabitants of the district were resettled or exterminated by the Nazis. After the end of World War II and the change of power on the territory of Lviv, the Soviet authorities resettled the proletariat here to restore industry in the district.

New residents of Pidzamche lost their jobs in factories after the collapse of the Soviet Union when there was a transition from a planned economy to a market economy, and local enterprises became irrelevant to the new economic demands. The residents of Pidzamche witnessed the decline of their district after a short-lived restoration and development.

The processes of destruction of cultural centers, particularly sites of architecture, by the Nazi and later Soviet authorities, as well as the current wave of decommunization, have caused irreversible changes in the Pidzamche district.

Nowadays Pidzamche is undergoing a phase of revitalization, but it is still a precarious, sometimes gloomy industrial district without developed infrastructure. Modern housing estates are being actively built in the district, while abandoned industrial areas are being rebuilt or deteriorated, roads are being repaired, and new markets, shopping malls and art cells are being planned. The district is changing rapidly. In a few years, current residents will find it difficult to recognize familiar buildings and streets, to walk along familiar routes or spend time in urban spaces as they used to. They faced the next challenge of adapting to the changes: getting used to a new look of the familiar district, matching the familiar street topography with images in their memory.

The problem of the disappearance of a certain layer of history and the change of the district – both architecturally and socially due to the construction of new apartment buildings arises simultaneously with many positive infrastructural changes for the residents of the Pidzamche.

Working with the public narratives and memories of the residents of Pidzamche informs and imprints the importance of both these narratives and the people who tell them, promotes the recognition of their direct relationship to a particular place and time. On the other hand, the external interest in the multilayered history of Pidzamche and its cells should promote the attractiveness of the area for its residents and for the residents of Lviv in general, encourage local communities to appreciate Pidzamche and not be ashamed of it. Pidzamche residents’ sense of importance to contribute in the prospect of their conscious and active involvement in processes concerning their district, in particular its public space.

“MagiC Carpets” is an international art platform created in 2017 that gives evolving artists and curators an opportunity to start their own “magical trip” by collecting local stories all around Europe and telling them in other countries through their art.

For further information, visit this page.

The project “MagiC Carpets” is co-financed by the EU Program “Creative Europe”.

The program of support and integration of artists who were forced to move to Lviv due to the full-scale russian invasion of Ukraine.

It is a competition to create modern artwork on a large-scale banner that will cover the restoration works on the Jam Factory building.