It is a competition to create modern artwork on a large-scale banner that will cover the restoration works on the Jam Factory building.

The invited Ukrainian artists were not decorating the banner but rather used it as a canvas to create their own works. This effort will result in a symbol for the modern art center on the territory of Jam Factory, and it will indirectly represent its values, ideals, and identity.

A banner with the work selected by our expert jury will be covering the scaffolding during renovation works around the original façade and up until the opening of the Jam Factory Art Center in 2022.

For the time being, the Jam Factory Art Center has made a public presentation of the competition results.

A 32×8 m banner featuring the work of the competition winner Olena Subach was presented on the 11th of December in 2020 and will stay up on the façade until the opening of the Jam Factory Art Center.

The demonstration of the banner in a public space of the building’s façade is a “bridge” between society and modern art. We hope it will deepen the understanding between the two.

Jam Factory Banner Art is a closed competition with 50 Ukrainian artists invited to participate. The members of the jury also received the list of contestants.

It was suggested that the artist would send us a sketch of their potential work for a banner together with its concept. The selection of works was conducted by our expert jury in two stages. Firstly, the jury selected the five most convincing ideas and then decided on a winner with a simple majority of votes. Five finalists received a cash prize. According to the competition terms, the winning work will be placed on the building’s façade and become the property of the Jam Factory Art Center. In addition, this work will be the first one in a future digital collection of the Center.

Both new and previously created works which haven’t been exhibited before are eligible for the competition.

We have received such types of artworks for participation: graphics, photography, painting, computer graphics, and collage.

The main demand to the works received was the ability to activate the identity of a space as an artistic institution and future modern art center with their main values and ideals of criticality, freedom, openness, and impartiality.

Along the pavement, in front of the Jam Factory building, there is a metal fence where the bulletin board with all the information about the winning project will be set.

Yuriy Biley, “Once Yuriy Sokolov Came for a Walk and……” / “I Was Here”

The jury consisting of Kseniya Nuril, Lizaveta Herman, Bohdan Shumylovych, Borys Filonenko, Bozhena Pelenska, Oksana Karpovets and Vasyl Kosiv selected the winner of the Jam Factory Banner Art competition: Olena Subach and her project “A Place for” as well as the finalists: Pavlo Kovach Jr. and his project “Nodding One’s Head” / “Shaking One’s Head”, Katia Libkind and her project “Untitled”, Yuriy Biley and his work “Once Yuriy Sokolov Came for a Walk and……” / “I Was Here” and Kinder Album with the work “Untitled.”

“The composition on the banner consists of the following:

All these components are dynamic together. They levitate above the black background and it isn’t clear if they are pushed away or, on the contrary, drawn in by one another. This is an alchemical process where two known elements form something different altogether, unknown and valuable. That’s how a moment from the Big Bang looks like in my imagination. The one that shaped Galaxies and life and, I think, it is a nice metaphor for a creation of a modern art center in Lviv.

The elements chosen for the collage are not random.

Apples represent the past of the Jam Factory. They are simultaneously its roots and fruits. Also, they are my regards to Vlodko Kaufman and his pears.

Children’s drawings represent the creative impulse that moves the world. One of the drawings has words “a place for” on it which became the work’s title.

Blue construction fabric shaped like drapery that resembles the folds on the clothes of saints from the Renaissance as if there’s something hidden. That Something is the best riddle for a human brain which is capable of creating imaginative things.

Each spectator can find something unique for themselves there. In my opinion, the fabric will also fit in with different building materials that in one way or another will be put around during the façade renovations.” 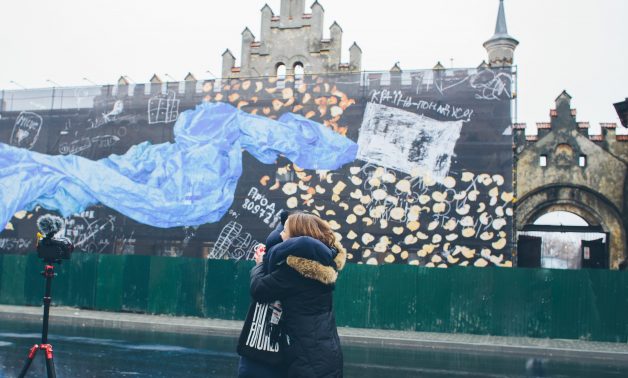 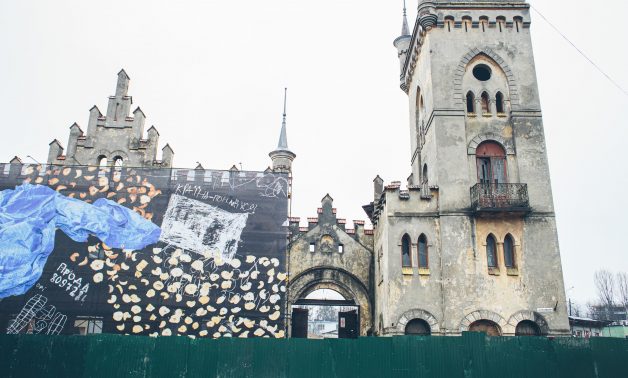 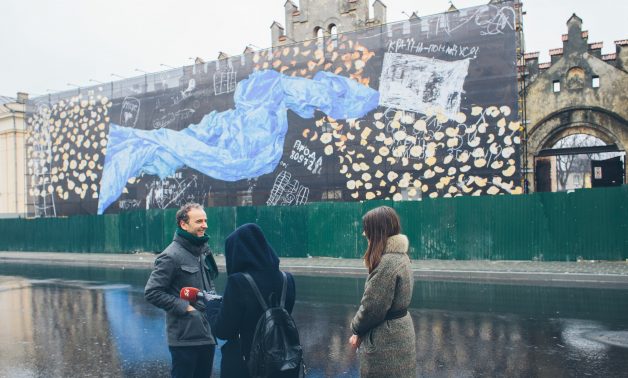 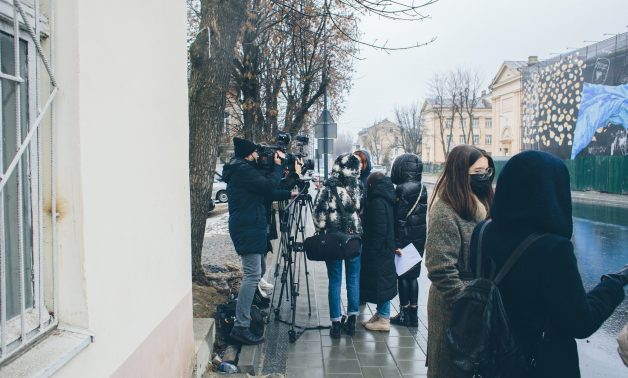 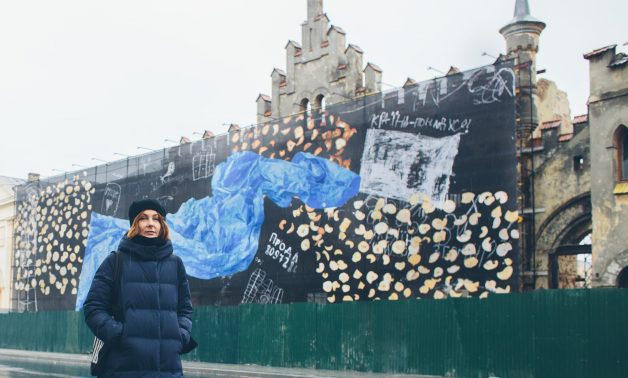 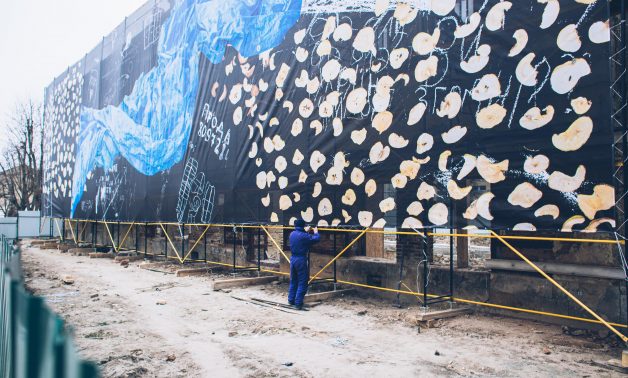 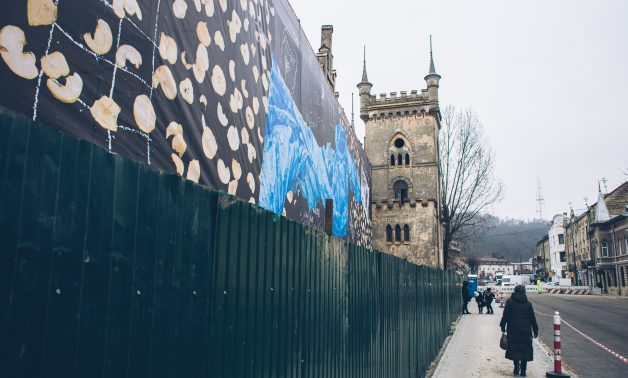 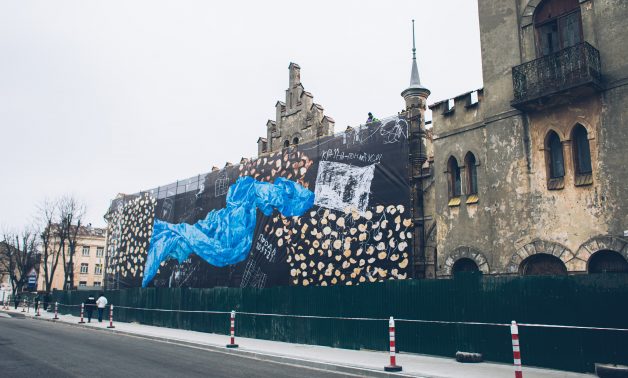 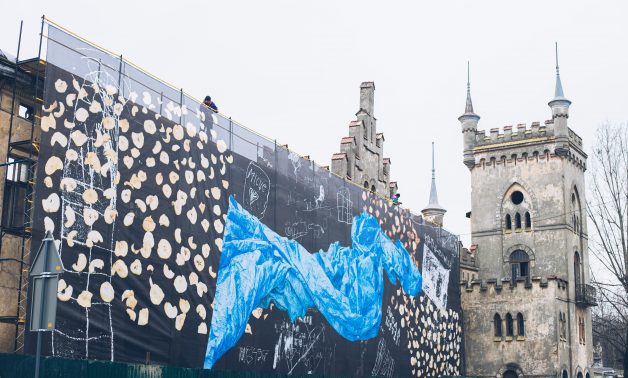 The program of support and integration of artists who were forced to move to Lviv due to the full-scale russian invasion of Ukraine.